Hope, Ten Years in the Making

Hope, Ten Years in the Making 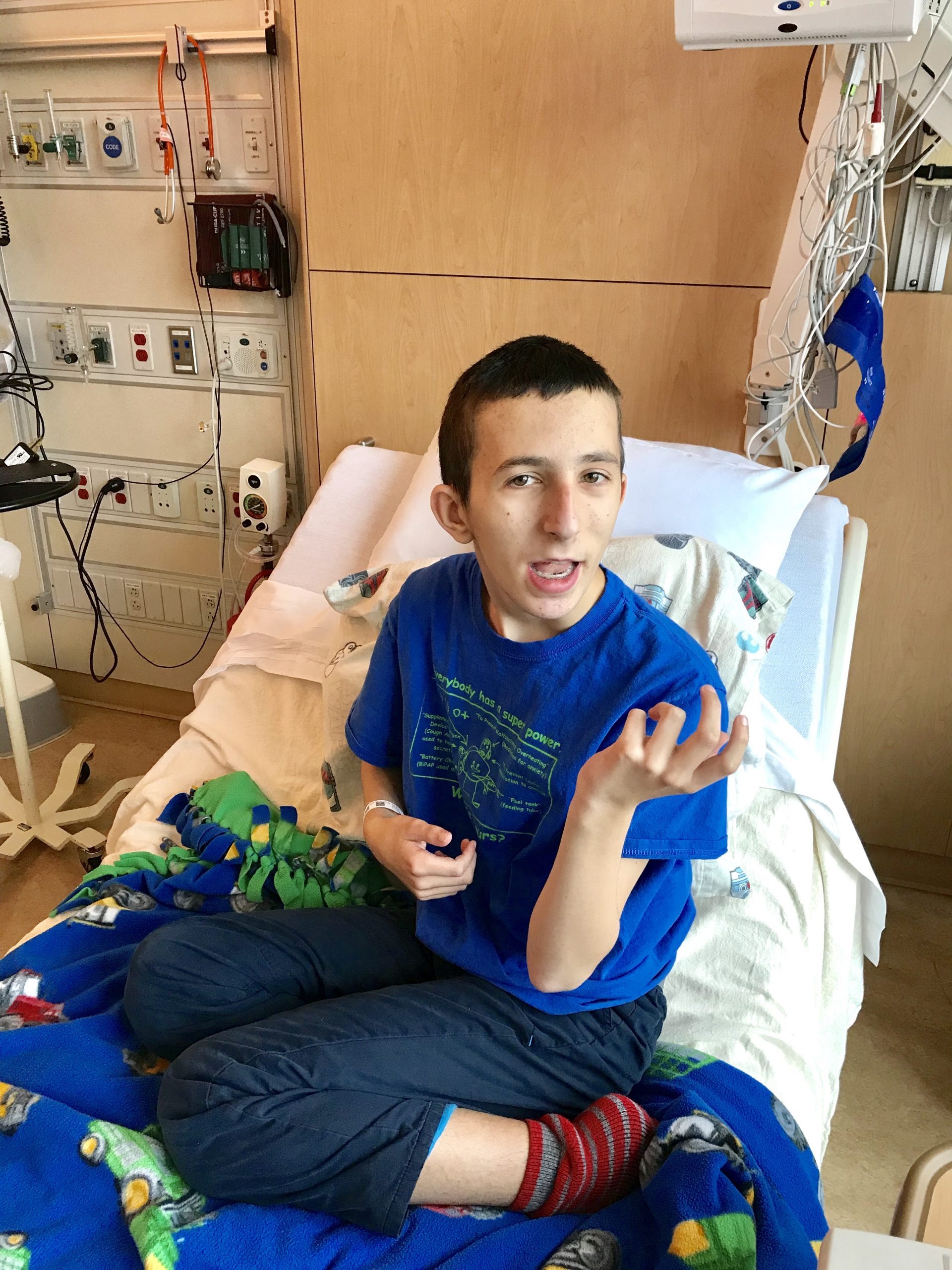 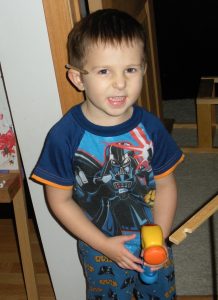 Over ten years ago, I first walked into the craniofacial and cleft palate clinic at the Univerisity of Minnesota, with my dear, sweet boy, Giacomo. At that time, I was well-entrenched in his medical mystery journey, still about two years away from a diagnosis of myotonic muscular dystrophy.  At this point, he had “graduated,” if you will, from a couple of speech therapists, not because they were able to actually help him, but because they couldn’t help him any further with the tools left in their toolbelt. He had seen several Ear, Nose, and Throat doctors, and only several, because I didn’t like their answers of “There’s nothing wrong with him.” Okay, in all fairness, a couple of them said that, and one said, “I don’t know what’s going on, but go talk to my colleague.” This handoff was to a plastic surgeon, who was amazing, despite her inaccurate diagnosis of him.

Dr. Marie Christensen, said amazing plastic surgeon, specializes in palatal abnormalities, often seeing kiddos with clefts, and other conditions that brought them to that craniofacial clinic at the U, which is precisely where she brought Giacomo.  While he didn’t have a cleft, his palate was so narrow, that it had almost no arch to it, and was more shaped like a “V” than anything that resembled a “U,” something I now know to be a classic feature of myotonic dystrophy. At that time, she was convinced he had a chromosome abnormality, DiGeorge Syndrome, so convinced, in fact, that she claimed she would eat her hat if he did not. Now, if you Google DiGeorge syndrome, you will see that Giacomo definitely seemed to fit the bill, in many areas. However, after blood testing proved her theory incorrect, I sat in her office, received the news, and replied back to her confidence, “Well, I hope you’re hungry, doc.” Lucky for us, her ego was not as great as her persistence to figure out what was going on with G, so she continued on the journey with us, and continued to have him seen at the cleft palate clinic, knowing that the team of doctors there could provide insight into future plans for his mouth.

Even in those first early visits, the discussion of future surgery on his palate was brought up. At that time, with my little four-year-old guy, it seemed like such a distant musing, something that would be done as a young adult, after he was done growing. He did have his first surgery on his soft palate, though, performed by our new friend, Dr. Christensen, who, in her quest for answers, found that way back in his mouth there was a hole that stayed open, instead of opening and closing to allow air to flow when it was supposed to and to not flow when it shouldn’t. She did a nifty little plastic surgery and created what is called a pharyngeal flap to support that weakness, which vastly improved the hypernasality of his speech and the chronic stuffiness/excessive boogers he had been dealing with. 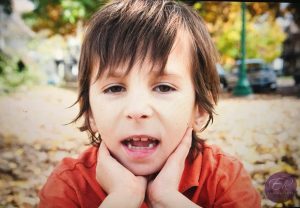 Fast forward a year or so and we’ve got the myotonic diagnosis and things are making more sense. A few years later, at age 8, Giacomo started the orthodontic plan that had been laid out by the craniofacial clinic–expand that super narrow palate and make room for all his teeth to come in.  This worked great until his fantastic orthodontist who had worked her magic decided to move away. Her replacement didn’t find it necessary to replace G’s retainers once he lost them (twice) despite my insistence that without them, his palate would collapse because the muscles were too weak to hold it. I’ll let you guess who was right.

Now it’s early 2018.  Giacomo is back at the University of Minnesota orthodontic/craniofacial clinic for another palate expansion (so, yes, I was right and it did not hold.) In addition, we found ourselves meeting with that oral surgeon, who had seemed so futuristic at one point.  Plans were beginning to unfold to realign his jaw and get his mouth to function like it is supposed to, or at least improve it to its best ability. At the moment, and for an incredibly long time, that narrow palate has forced Giacomo’s bite to be so altered and open that only his very back molars currently touch. This makes everything he does with his mouth super challenging–breathing, biting, chewing, swallowing (food and saliva in general,) and speaking. If you’d like to imagine what this might feel like, try swallowing with your mouth open. Once. Then you might get a glimpse into how hard these basic functions are for him. All the time.

These unfolding plans were kind of scary plans, I will admit. The oral surgeon estimated that this surgery, one that is outpatient for nearly everyone else, would put him in the ICU for at least two weeks. This was hugely due to the fact that, with the new improved jaw, he couldn’t have any pressure on it, which meant that using his fancy, keep-you-breathing-while-you-sleep AVAPS BiPAP portable ventilator mask wasn’t going to be an option.  Oh, and they estimated that he would lose about 20 pounds after the surgery. If you might remember, I had just gotten the “we’re a little worried about his weight” conversation about a month earlier, so I was already feeling nervous.  This idea of a 20-pound weight loss freaked me out completely,  and I thought, at that time, “If my guy loses 20 pounds, he’s going to die.” In addition, just going under general anesthesia can be fatal for people with myotonic dystrophy, so every surgery is a big risk.  Add to that, the fact that it may not even hold, and could have to be repeated in the future. The surgeon and I talked a long time, and I tasked him with talking to the entire team:  the speech-language pathologist who had been watching his swallowing functioning decrease, the pulmonologist who was watching his respiratory functioning decline, the orthodontist who needed to work to keep things in place so that this whole ordeal was not in vain, and the neurologist who knows myotonic dystrophy. I needed a real risk-benefit analysis. And I got it. 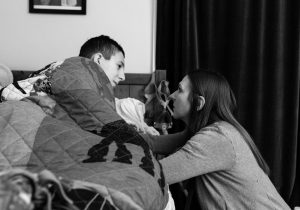 The team decision was made to move forward, that the surgery would improve his quality of life NOW, and that not doing it put him at greater risk for breathing obstruction, swallowing problems and the aspiration pneumonia that comes with it, and further decline with his ability to eat, talk, and actually enjoy his life as much as possible for as long as he’s got a life to live.  As the year continued on, his treatment proceeded with the orthodontic clinic to get his teeth perfectly aligned, in preparation to break, realign, and essentially reconfigure his jaw.  All of my efforts to help him gain weight over the next several months were a complete failure and he got that “Failure to Thrive” diagnosis in July of 2018. However, watching his increased challenges with chewing and swallowing made it abundantly clear that he was just working so damn hard to eat that he was burning through way too many calories, and add in the emotional toll of eating being less enjoyable and more of a chore, and that feeding tube surgery last November for G’Bot was hands-down the best decision ever. Now the concern of him losing weight isn’t there, as we can just give him all he needs through the tube if his mouth is too sore and/or he is disinterested in sucking pureed foods through a straw.

And here we are. In mere hours, my dear, sweet boy will head back into the operating room, for the surgery that has been over 10 years in the making, years that have gone by in a blink, in the hands of the surgeons who have the potential to change his life.  I am sitting watching him restlessly sleep, as I know he feels the same nervousness and cautious optimism as myself, and honestly, I think his entire team. The tears well up, but I only let them stay for a very short time. I fight them back, just as I have been every time I think about this surgery for more than a minute because if he wakes up, even for a second, and sees me crying, his confidence will be shattered. I have spent a year and a half, and really years, convincing him that all that he has endured in his mouth and will endure with this surgery will be worth it. 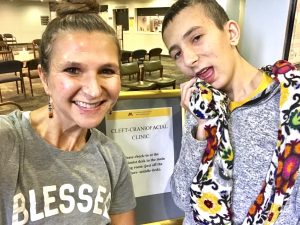 The problem is–I don’t know that it will. I hope that it will. And that hope is all I have at the moment. And the same hope this guy is counting on…this guy, who at his last pre-op visit to the orthodontist, was in so much pain as the added the wires to the wires of his braces that will hold his jaw wired shut, he shouted to me, “Give me that! I need that!” My scarf. My absolute favorite scarf. He brought to his face, and snuggled it, breathing in my familiar scent, just like that little boy who had first entered that craniofacial clinic. He held it close to his sore mouth and kept it there for the duration of the appointment, on our walk out of the clinic and all the way back to school. I am wearing this scarf all night long, ready to offer it to him whenever he needs it. Whenever he needs hope that this will be okay.

I believe in our team. However, this whole surgery is full of great unknowns, something I am used to, but still don’t like, namely in circumstances that I have been the provider of reassurance around. We have yet to hear super clear plans of how they will perform the surgery, how they will hold it in place, how they will support his breathing, how long he will be in the ICU (as I have now heard maybe only a few days, which is quite different than 2 weeks,) how long he will be in the hospital, how long the recovery will be, and how long we will wait to see results, just to name a few.

So where does that leave us? What do we need from all of you, our supporters? We don’t need your reassurance. Please don’t tell me everything will be okay and worth it. None of us knows that it will be.  Please just send your healing energy, your good vibes, your prayers, your positivity, your light, your love, and above else, your hope. Because, frankly, hope is all we’ve got at the moment, that same hope that I’ve been carrying for over ten years.