In the world of heroes, you may have heard of the greats, like Luke Skywalker, Wonder Woman, Captain Underpants, and the like.  However, all of those characters can consider themselves relics, now that G’Bot has arrived. What or who is G’Bot???  Well, it all started a long time ago (well really earlier this year,) in a galaxy far, far away (okay, actually the University of Minnesota Children’s Hospital)….

Last January, whilst spending hours at the Muscular Dystrophy Clinic for their bi-annual check-ups, it was brought to our attention that Giacomo’s weight was starting to decline, and he was falling off the growth curve. Working as a lactation consultant, tasked with keeping babies growing well, I am quite familiar with the curve and desired trends. At this point in time, they weren’t overly concerned, but brought in the dietician. Now, I have nothing against the field of dietetics, however, doing what I do for work, in addition to my own personal journey with gut health and food, I am not a fan of the cookie-cutter, bring-on-the-full-fat-dairy-and-lots-of-it approach to increasing caloric intake.  Also, had this person read his chart, lousy with dysphagia and swallowing issues, or looked at him to see incredibly evident orofacial weakness, perhaps they would have not suggested giving him nuts to eat. Needless to say, I politely took the advice, and silently declined it all in the same moment.

I spent the next six months working on getting him more food, finding easy snacks to eat to not only stabilize his ever-finicky blood sugar that often leads to hanger, but also to boost this dipping BMI.  By July, my cautious optimism would be shattered, when Giacomo was officially diagnosed “Failure to Thrive.” Now, again, I know these words all to well, as I see this in the little babies I work with, and I know it’s nothing to mess around with.  Enter “Operation: Get weight on this kid!” We were told, at that time, that we would give it another six months, with monthly weight checks, and reevaluate. The discussion around possible placement of a feeding tube began, and I perfected my protein smoothies (too much powder, and he was on to me and would refuse it, finding just the right mango-apple juice ratio) kept pushing the snacks and fed this guy as many cheeseburgers as he desired.

After what I thought to be a successful month of calorie pushing, the scale would prove otherwise–he dropped a pound instead.  A few weeks later, his swallow study would shed some light on what was happening–just like all those babies I work with who work so dang hard to breastfeed that they burn through more calories than they take in–he was simply struggling too much to chew, swallow, and take in enough calories to sustain himself.  Then throw in the fact that there was evidence that, due to his neuromuscular disease, his brain is no longer doing a very good job at telling his tongue to swallow, even when he is cued to do so and his actually tries, leaving huge amounts of food there hovering over his airway, just waiting for one bad twist of choking fate to land it in his lungs (and in case you didn’t know, aspiration pneumonia is one of the major causes of death for folks with myotonic dystrophy, so definitely something we’re tying to avoid,) and you can see the cause for concern.

The next stop was with the pulmonologist who gave us one more month (so roughly 4 less than the original 6 I was anticipating) to see how is weight was, but I knew the road we were heading.  At that point, I had already shed my tears over the idea of the feeding tube, knowing that it was ultimately the best, safest, and most viable option to improve his overall health, and I had been trying to warm Giacomo up to the idea of it. Knowing what a sucker G is for babies, I, again I decided to, once again, make it about breastfeeding, sharing stories with him of tiny babes who sometimes need supplementation to grow and be healthy, something which really seemed to resonate with him.

Three weeks later he had dropped another half a pound.  Yep, this kid is seriously struggling. It was time to move forward with the feeding tube. I looked at this “Failure to Thrive” not as a failure for either one of us–I hadn’t failed to do my absolute best to try to feed my son, nor had he failed to try to eat.  I looked at it as this–failure to not move forward with getting him the nutrition he needs would be “Failure to Act” on my part.

Upon getting this news, I, in my glass-over-half-full mindset wanted to put a positive spin on this, and quick.

“You know, buddy, this is really pretty cool, when you think about it.  You’re kind of like a robot getting a fancy new fuel tank!”

He seems moderately intrigued.  “Yeah, I guess so.”

Okay, I’m think I’m on a roll here. I want to go with this robot idea, as speech is becoming more challenging, and we have been talking with his support staff about him using some alternative devices to aid him in communication, some of which may have a computerized voice.

I keep going. “And you know, you kind of already have some things that are kind of robotic about you–think about all the cool machines you use! And the medicine you take too–what could that be for your robot?”

The next thing I know, he grabs a piece of paper and a marker.  Minutes later, he runs to me, his masterpiece in hand–he has created “G’Bot”, a robot that not only has a “Fuel Tank” but also includes his “Battery Charger” (his Bi-PAP machine he uses during sleep, “Supplemental Oxygen” (his Cough Assist device to clear secretions and increase lung capacity, as well as ports for his medicine to “Prevent Leaks” (i.e. control his excessive saliva) and to “Prevent Malfunction and Overheating” (also known as anti-anxiety meds.) 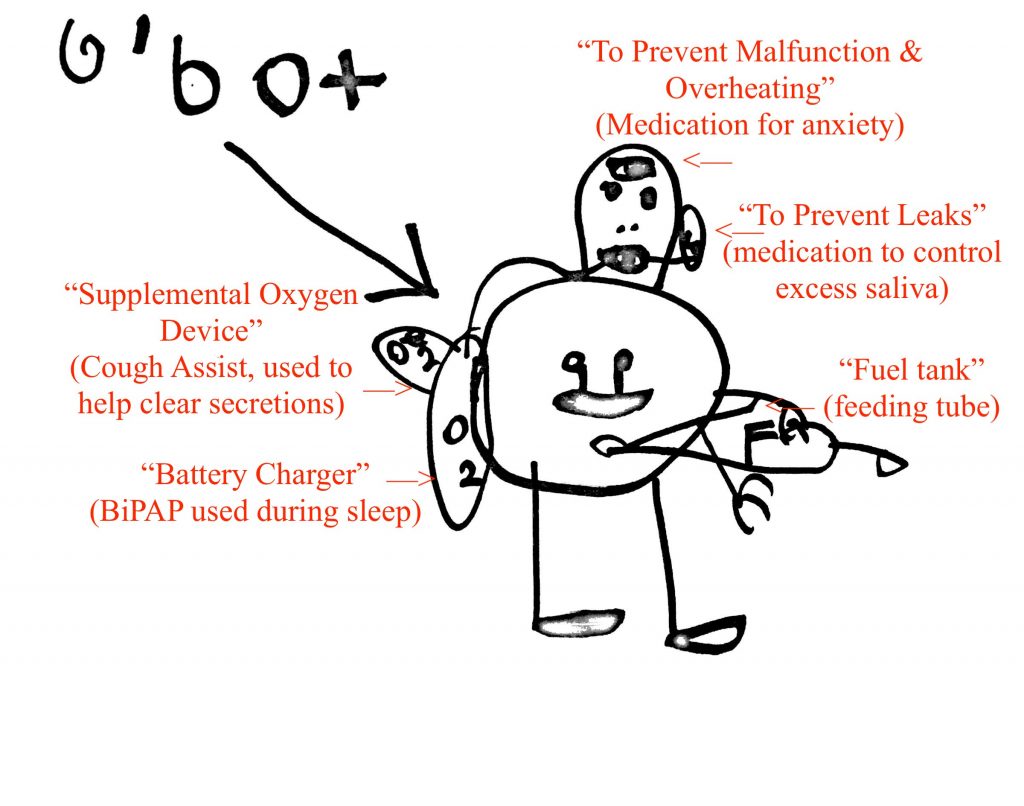 Blown. Away. This kid is amazing. My train of positivity has left the station! I keep him going….

“And, isn’t it kind of crazy that this tube is named after you?? A G-Tube?” (In case you were unaware, Giacomo–sounds like “Jock-a-mo”–goes by the much more easily pronounced “G” quite often.)

“YouTube! Yes!! It totally does,” (Yes, a leading question, appealing to his dream of starting his own YouTube channel, but I had to keep this guy on the train.)

“Yeah! You could totally start your own channel, and call it….”

“I LOVE this idea.  Maybe it could star you…”

“Yeah! Buddy this all sounds amazing!” (Okay, I will admit that I am less interested in the whole idea of watching someone play video games, but I am, after all a 38-year-old woman, and not a 14-year-old boy, and apparently this is a thing.  But this guy’s heart of gold is shining so brightly. In addition, there are way worse things to watch on YouTube, so I will definitely not protest any of this.)

Success! He has not only hopped on my train of positivity, Giacomo, AKA G’Bot is now conducting it!

The best part?  The following day, I had already had a visit to Giacomo’s 9th-grade community meeting to talk about his disease, something I do each year to their classes to build awareness not only for myotonic dystrophy, but differences and challenges in general.  This time around, G and I, together, introduced G’Bot to his class, and after listening intently, question time came.  Their questions?

“How can we help?  Do you want help with the G’Bot comic? With your G-Tube channel? What else can we do for you?” Yes! I’ve always loved this community at Great River School, but now my heart is overflowing with gratitude and the smile on my son’s face overshadows any reservations he has had about this G-Tube.

Oh, and my faith in the future of humanity? Restored and inspired, by the latest hero–G’Bot!!