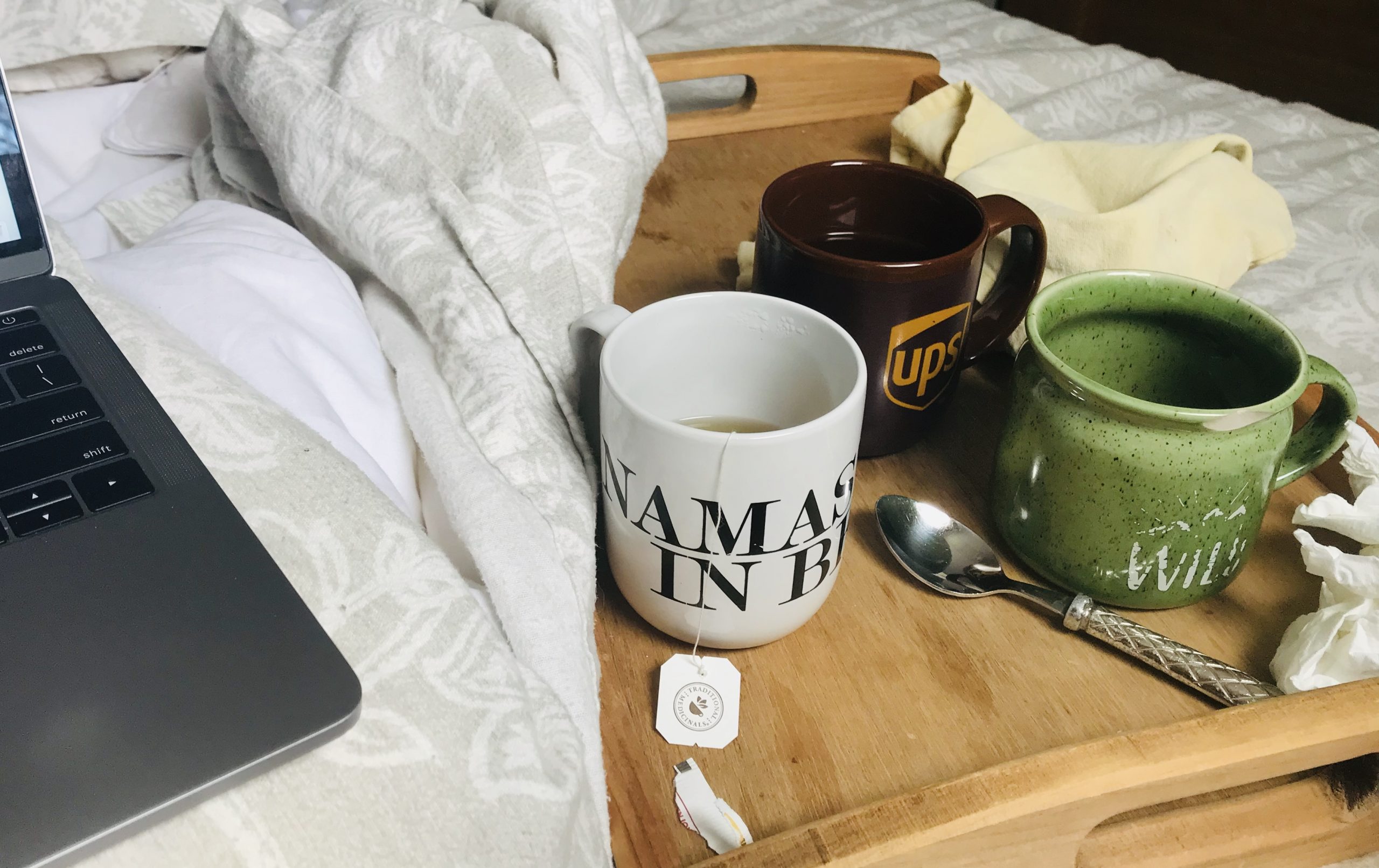 Those that know me, know that I have a habit of having multiple beverages going at any given moment, and today was no exception. This morning I had:

-Throat Coat tea to remedy a hoarse voice from teaching all weekend, while pretending not to have a cold, with ears still plugged from the flight home from Costa Rica a week ago, in Gigi’s “Namaste in Bed” mug, because I actually still am in bed, not resting, but catching up on work in a quiet, cozy place, because let’s face it–we all know I don’t actually have the day off, but am just working from home, until I have to go to work outside of the home in the afternoon.

-What was once coffee, in my “Into the Wild” mug, that has clearly been worn through much use, as I literally just realized, in this moment, only reads “Wild,” now, in addition to having recently sustained a big chip that no one seems to be able to explain to me. Despite these imperfections and signs of wear, it is still quite functional, both attributes that feel pretty perfect for me and remind me of myself.

-Water that never became tea last night, as I was too warm and toasty from a super long soak in the tub, yet I didn’t have the heart to turn it away when my wife brought it to me (in my favorite mug, leftover from her days delivering packages instead of tea,) in her incredibly sweet effort to further my relaxation. Now, it is serving the purpose of additional hydration, which is always a good thing. Oh, and speaking of my wife bringing me things, this tray of beverages also once held the breakfast in bed she had brought me earlier, something that almost never happens, mostly because I don’t sleep much or stay in bed long enough for anyone to have to opportunity to bring me breakfast. However, today, I am quite grateful for the sleep, the food, and the beverages.

In addition, I am also sporting the world’s most incredible microfiber bathrobe, which I scored from the Sheraton Waikiki on Isadora’s Make-a-Wish trip (and by score, I do mean legitimately paid for, not pilfered from the hotel) because it was so damn comfortable I had to have it as my souvenir.

I have a nice conversation with my parents, send some emails, check in on some upcoming doctors’ appointments, and start writing this post, thinking it’s going to be short, sweet, and mostly a dedication to my wife and her trying to give me some much-needed TLC….and then the phone rings.

It’s Great River School. Gianna is sick. Well, at least she is claiming to be sick. She has no fever, no overt signs of illness, but nonetheless, I am on my way to get her, because she does have this fun little condition of cyclical vomiting syndrome, and can start puking her guts out for hours on end, with no apparent trigger or underlying illness. Though I suspect it’s just fatigue and perhaps some anxiety, I’m not going to chance it. My day “off” is officially over, and I am back “on.”

I get her settled at home, tend to her for a while, before having to dash out the door. I work for a couple of hours, stop at the grocery store, make dinner, enjoy a meal with my wife and kiddos, and finish the bedtime routine that Gigi has done a fabulous job of starting, before tucking them all in their beds (and yes, Gianna has made a fully recovery from what I have deduced was math-induced temporary sickness syndrome, more than anything.)

I wash dishes, make lunches, and finally get ready to relax with last week’s episode of Gray’s Anatomy….and a couple more beverages. I’m back to more Throat Coat tea and ice water, the perfect compliment to my popcorn…and the constant alarms going off on Giacomo’s portable ventilator.

We make it through Gray’s, and attempt to keep the mindless screen time going watching young people fulfill their dreams on American Idol, but after only a few minutes, I have to turn it off to go to bed, back to the site of my fabulous (and temporary) day “off” because I already know, with the sheer number alarms going off at this point…this isn’t going to be a night “off” either.